Mom’s Chicago accent flattened further annoyed, “Are you watching that craappy Jaack Cousteau?”  In 1970, or thereabouts, she had few options:  Read her Harold Robbins book, telephone a friend, or pull rank and change the channel that enthralled her two boys, ages 15 and 11.

My older brother dreamt of scuba diving.  I felt hypnotized by the colorful sea creatures and the elegant French accent that described what we witnessed and what threatened it.

45 years later, I sit on an over-water deck in Roatan.  This Honduran island in the Caribbean rises above the Mesoamerican Reef, the world’s third largest coral reef behind the Great Barrier Reef and Apo Reef, Philippines.  Yesterday,  a squadron of a dozen of iridescent squid spellbound us.  The day before, I shadowed a school of about 150 mauve and olive fish they wandered through and around the different corals, pausing to pick, pick, pick at them. Take your human to work day, it felt like.

Mom hauled us to swim lessons at the Elmhurst, Illinois YMCA.  A city girl, married and a mom at age 19, she never learned to swim and did not want to bestow her limitations upon her kids.  Thanks, Mom.

In 1980, Roatan had one phone, a dirt landing strip and no electricity.  A couple from Texas built rooms above their boat and started a live-aboard dive operation.  Then, they purchased land to dock the boat. One piece at a time, they developed this diver’s haven.  Sunday through Friday, four or five Coco View dive boats head out, usually two times per day.  People of all shapes, sizes and ages, step off, fully loaded with all kinds of gear that did not exist in 1970.  Dive in the morning. Eat lunch. Dive in the afternoon. Eat dinner. Repeat. 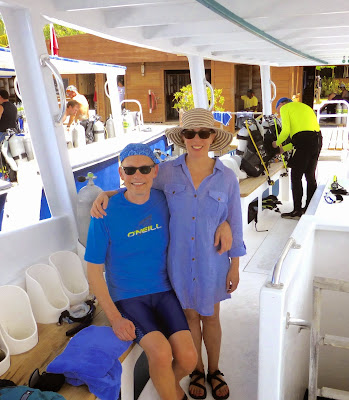 First night, they provide buoyancy training – getting weight just right to float like a jelly.  A single finger is all a diver should need to push off if drifting toward coral. Body control is critical to avoid damaging the reef.

We don't dive. We snorkel. We're not the only snorkelers here, and this is their second visit. Coco View’s “Front Yard” is plenty satisfying for them - no boats needed.  Snorkelers flipper over the turtle grass to a great variety of corals, which would be fun to see even if there were not a hundred species of fish with crazy shapes and colors.  Lionfish!  I swear, it looks like it has feathers.

I saw a cruise ship depart yesterday with its 3,006 passengers plus 1,156 employees.  Roatan's first dock accommodated one cruise ship.  A second dock accommodates multiple ships. Over 30,000 visitors (plus 11,000 crew) tie up in a single week in January.  It's money for the islanders, says Jorge, our boat driver.  Our dive master, Eddie, agrees with the economics.  But, he shakes his head when discussing the day-trip dive operators who “just throw weights on them.”

Jim quit his Silicon Valley job to run the dive shop for two years.  “I’ve noticed changes from just six months ago; broken off coral.”  He blames the cruisers.

Thursday morning, we snorkeled again in Coco View's Front Yard.  Soon, we plowed into a current full of grody trash.  Its shredded nature was characteristic of cruise ship dumping, which could have drifted from 1,000 miles away or, perhaps, returned from the ship that departed yesterday.  Or, maybe the recent rain washed islanders' trash into the sea.  Disillusioned and disgusted, we turned back for shore and boarded a boat in the afternoon.  (Friday was trash free.)

Environmentalists assert you must teach people to love the environment before they will care enough to preserve it.  That’s probably true for big issues, including climate change.  But for great little corners of the world, maybe it's better to teach locals and keep outsiders ignorant.

Don't electrify.  Provide no air conditioning or Internet.  Don’t pave the runway, and NEVER build to accommodate a cruise ship.

Roatan?  Forget I mentioned it.