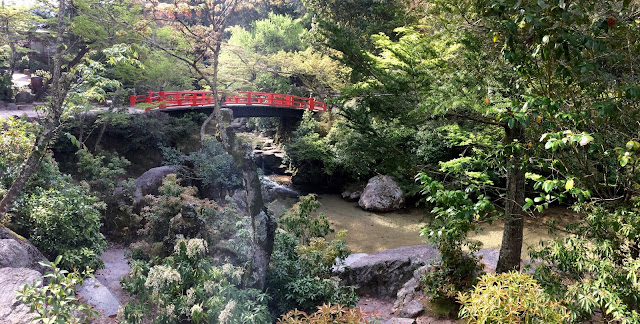 Greater Hiroshima is the home to 1.2 million people and 2,000 okonomiyaki restaurants.  We found the one run by a Guatemalan and his Japanese wife for 17 years.

Okonomiyaki means grilled (yaki) what you want (okonomi).  Hiroshima style starts with batter on a grill that becomes crepe-like.  Then, they pile toppings: cabbage, seasonings, pork belly, fried egg, soba or udon noodles, and other things.  Squid (fried or not) and green onions were among the option available at Okonomiyaki Lopez.  The master chef must flip the materials over and back at the right time.

Although okonomiyaki had been around since the 1900s as an afternoon snack, after the A-Bomb, it became a survival food.  People used scattered metal as makeshift teppan griddles.  People scrounged whatever food they could and grilled it all together.  These days, the griddles are designed with precision so that the heat is evenly disbursed so the chefs can produce consistent products.

In some cities, okonomiyaki still mixes everything together.  In Hiroshima, the layers remain distinguishable with a cut-able crispness to the cabbage (important to us for sharing).

Fernando Lopez and Makiko (raised in Hiroshima) have an interesting story, which has been told elsewhere.  (Rice, Noodle, Fish by Matt Goulding).  One of their three sons is in Seattle.  We offered to show them around Portland if they make it our way.

Onomiyaki is among the things to do in Hiroshima.

Another thing is professional baseball, the Hiroshima Carp.

Reserved tickets were sold out, and the unreserved section filled up on the lovely night we attended (part of) the game.  Fans were fanatical.  Probably 90% of the crowd wore red and / or white team gear.  They chant together and enjoy ballpark food, which looks like the other food around town.  Noodle bowls, rice bowls, yakitori . . . .  Remember, “taco” means squid here. 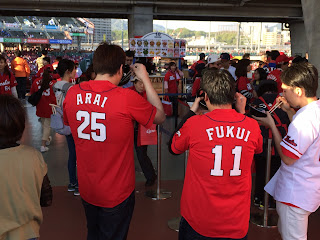 Email ThisBlogThis!Share to TwitterShare to FacebookShare to Pinterest
Labels: Journal, Okonomiyaki in Hiroshima, things to do in Hiroshima, Travel

Give or take TEN THOUSAND.

We did not visit Hiroshima because of the bomb.  We came to Hiroshima to catch the ferry to Miyajima, and Hiroshima is so much more than the bomb.  But, on August 6, 1945, a blinding light signaled detonation 600 meters above Hiroshima, and about 150 meters from the so-called dome, which was just a commercial exhibition hall, much like the places my dad went to for various conventions in Chicago in the 1960s and 1970s.

Black and white photographs from 1945 show some other commercial buildings withstood the concussive power and heat blast of 3,000 to 4,000 degrees.  A Shinto gate, and gravestones didn’t budge, either.

The people of Hiroshima completed demolition of the other buildings and rebuilt this city.  Many city leaders wanted to erase from the map The Dome, too.  Who wants to remember such a tragedy?  221 neighborhoods destroyed, not to mention the people.  Lots of people.  Teenagers, men in their primes, fashionable women, grandmothers and grandfathers.  Children with melted skin who became blind before dying days later in front of their parents, who, in turn died weeks later.  Others believed The Dome should be preserved and, in 1966, enacted a law to do so.

The remembrance expanded to include a Peace Memorial Park, hall, museum, conference center and other monuments.

It is not about fault.  (Pearl Harbor is acknowledged along the way, as is the delivery vehicle, a B29 bomber.)

Instead, it is about conveying “the truth of the tragedy to people around the world and ensure the future generations will learn from the experience.”  (Seeing pictures from Syria in 2017 make me wonder if humankind will ever learn.) 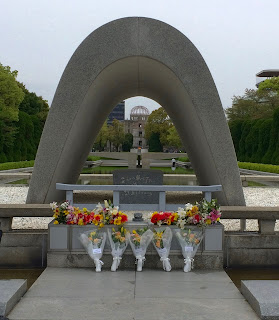 It was an unassuming little monument, which  reminded me of a covered wagon, that forced me to choke down a sob.  A reflecting pond points from it to a flame and toward The Dome, which is a fairly long way off and over the river.  When one stands behind it, the cover frames The Dome.  Under the cover is something like a crypt, but, instead of holding bones, it holds a register of the dead, at least those names that could be figured out.  Public and private records vanished in an instant.

(Note the low branch in video below.)

Time out in Kinosaki 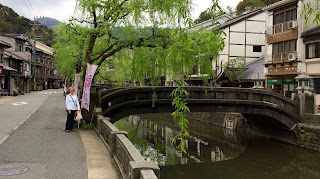 Kinosaki, Japan is a long way from Tokyo, even longer from Portland, Oregon.

Just off the Sea of Japan, the village of 4,000 people has a main street along a canal with a few fish stores, several souvenir shops, cafes, restaurants, and a couple of convenience stores.  The tourists come here for the hot springs, peace and quiet.

Anyone can visit the seven public hot-spring baths.  One sees some people walking around town in their yukatas.  The city’s brochure says to think of the entire town as a lodge and the streets like hallways.  Yuraku Ryokan, our inn, allows guests to schedule private times in three different rooms plus offers shared baths, whenever, on premises.  So, no need to run around.  Nevertheless, A' headed out to Goshonoyu Onsen this afternoon, while I snoozed.

We lucked out with our room, which is huge and has a nice view of the garden and hillside forested with bamboo and tall evergreens. 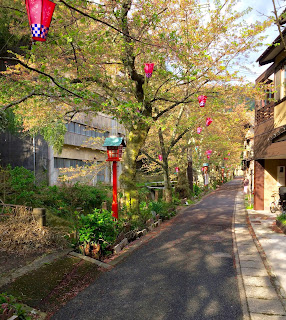 Dinner and breakfast are served in the room, kaiseki-style, “the ultimate of Japanese food,” according to the Japanese National Tourism board. There are cold foods and hot foods of different colors and flavors.  It is seasonal and local.  (Crab is big here.)  We cooked crab ourselves in boiling water and steak pieces on a mini-grill; a ridiculous volume and variety of foods.
In town, one tiny place sold ice cream, steamed buns, and raw eggs to put in a bag and cook in the hot spring water just outside their door.

We are enjoying the time to recover from sightseeing around Kyoto and Nara as we continue to drink in traditional Japanese culture.

Oh, and though we are a world away from Portland, we saw a restaurant offering coffee from Portland Roasting. 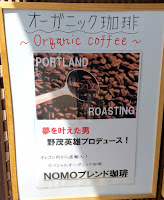