Jet boats in wilderness? Does a bear shit in the woods? 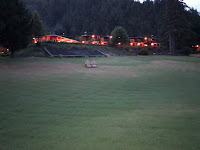 Oregon’s Rogue River promises the beauty and romance of wilderness.  I’ve been meaning to get down here for years.  Finally, we made it to Tu Tu Tun Lodge near Gold Beach.

Looking out our window this morning, marine clouds top the forested ridge across the river which is a short walk past the swimming pool, the green lawn, and the river rock at water’s edge.  At times, the river is 10 or 20 feet higher.  Today, it is a very peaceful.  A few birds paddle now, and the kayaks await our paddles later. 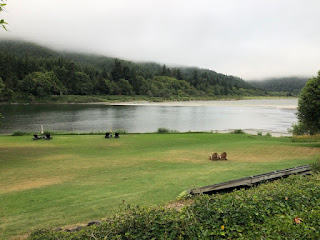 Ecosystems amaze me, and scientists learn more each year.  Nutrients from the forests wash down toward the ocean, forming estuaries rich with diverse plant and animal life.  Sea nutrients go upriver, too.  Salmon nutrients upstream fed not only bears, who then distributed the nutrients in the forest soil, but also bugs and other invertebrates that fed off the dead salmon that completed their life’s journey.  The birds eat the bugs, and scientists have identified salmon nutrients in them, too.   (Typically, I get my salmon nutrients from Trader Joe’s and restaurants.)

Unlike within other wilderness areas, the government permits lodging along the Rogue up to a point, when there are only grandfathered houses.  Motorboats may continue upstream.  We took Jerry’s Jet Boats upriver 32 miles to the little town of Agnes, population about 75 people.  Agnes used to have a little school for K – 6, but no more.  When they got down to 5 students about a decade ago, it closed.

At Gold Beach, tourists stop along Highway 101 where river meets ocean.  Not much there other than Jerry’s, gas stations, and a couple of places for food.  A general hospital and the county seat provide for other employment, too.

Jerry’s Jet Boats is not a wilderness experience.  It’s more like splash mountain.  However, it provides tourists a quick look at the contours of the lower 32 miles of the Rogue River.  We saw recreational vehicles, osprey, eagles, tents, blue heron, egrets, geese, mergansers, river otters, and other critters.

Jerry’s can load about 50 people per boat.  Using three car engines to power us past depth as shallow as 10 inches, Jerry’s’s multiple boats roar up and down the river several times per day.  The boats bring tourist dollars upstream where we deposit them with the two restaurants and servers, who distribute them further in the woods. 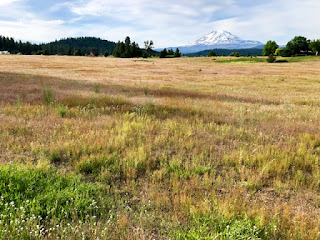 Life transitions forward as we begin the tenth year of CarpeSummer and the first summer of my 7th decade.

Kent, Kate and Ben moved away; Zara and Jack visit nearby; Allyson and I moved across town; and my spiritual home no longer includes my vacation home.  The overall feeling is both disorientation and excitement, like wandering the warrens of a market in a third-world country.  It’s eager anticipation of the new school year while grieving the loss of summer friends and freedom. 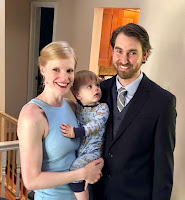 K, K and B needed relief from oppressive job demands and inadequate living space.  Their perseverance through a couple of tough years should lay the foundation for a fulfilling life.  Their presence in my life has been rewarding in too many aspects to count.  Just one example: walking with Kent in October 2017 was the genesis for moving out of The Pearl District.  I enjoyed our relaxing, peaceful walk where we engaged in thoughtful conversation, which is difficult to do in Downtown, The Pearl District, or ChinaTown / Entertainment District (a.k.a. Drug Acquisition District). 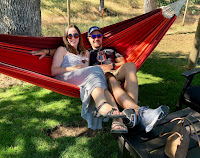 From June 2018 through June 2019, I’ve moved out three times:  Condo to Apartment, Apartment to new home, and moved out of Trout Lake.  Each time, I have culled and culled and culled again.  Little things, like donating the otherwise terrific shirt that almost fits.  Big things, including comfortable chairs.  And bigger things, like an extra home in which I nested comfortably after 14 years of making things just so.

Many of the items disowned were attached to memories.  While another will enjoy a painting, she will not see its shadow of us happily visiting the art fair on that sunny, July afternoon.  Other items preserved capabilities.  Now lacking a table saw, I’ve lost the freedom to make certain things myself. 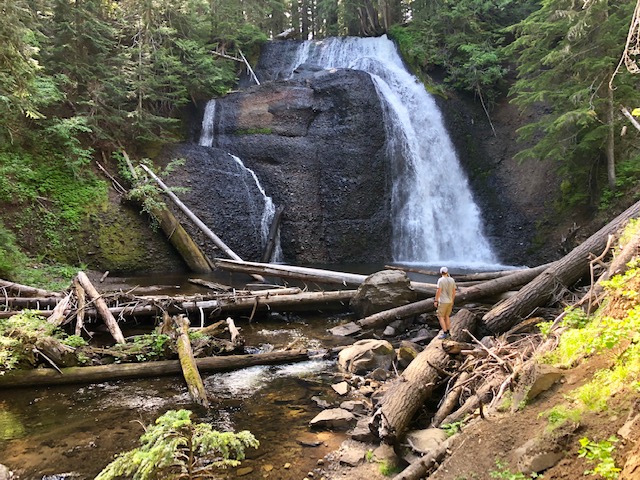 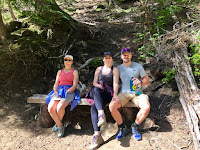 The moves encouraged me to analyze what I need, what I want, and what I do not want.  It forced me to consider who I was and who I am (especially the boxes of photos and trove of letters) and what I want for the future.

Today, I pair the old saying, “You don’t know what you’ve got ‘til it’s gone” with you don’t know what’s beyond the horizon until you get to the horizon.  I have a deeper appreciation for family, long-time friends and special places now more than ever.  I can hardly wait to engage new people and new places.
Posted by Je4son at 9:07 AM No comments: