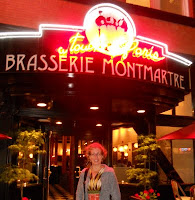 Picnic in a park, movie, and conversation highlighted my first full day of summer. Dina’s birthday celebration in Rockwood was a good opportunity to see my “cup of coffee” friends. Then, Allyson and I grabbed a bite to eat before seeing the movie Midnight in Paris.

I enjoyed Woody Allen’s essay on nostalgia and how one can overlook the contemporary avant-garde. In Portland, I suppose the vanguard includes those involved in the locavore and bicycle movements. I’m proud of the food in Portland: the restaurants, farmer’s markets, local brewers and spirit makers.

I’m shocked at how many bicycle shops I see around town. Just about every Portland neighborhood has one or more places to buy and repair bicycles. I noticed an ad for one that now includes an on-site café. At rush hour, the designated bike lane on Williams Avenue is full. We’ve all seen bicycle couriers and pedi-rickshaws. But on Thursday, I saw this bicycle delivery truck in action. 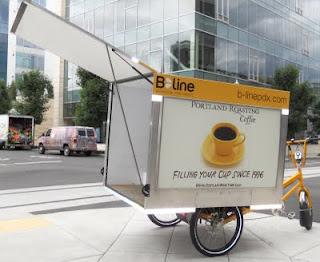 What the locavore and bicycle movements have in common is that they offer something everyone can do to promote good for the world. You don’t have to be lawyer litigating the Endangered Species Act. You don’t have to worry about how Samuel Alito’s elevation to the Supreme Court has doomed the United States to Corporate Serfdom for at least the next generation. With the food and bike movements, everyone can do something today

After the movie, we walked to the Brassiere Montmartre, an establishment that has been around for decades. Woody Allen explores the concept of historical layers in a place, (which I explored previously).

Over a Pernod at the Brassiere, I considered a time in the 1980s, on a hot summer evening, when Knudson and I enjoyed a high-flying jazz band in the Brassiere. Back then, the tablecloths were paper and guests used Crayolas to draw. In fact, the bar sponsored art contests, and the walls used to be filled with some of the most amazing crayon drawings. Since the remodel, the Crayolas and the art are gone, replaced by a slightly more upscale look of wood, mirrors and exposed brick.

Even in modern Portland, the layers of history exist, they’re just not as widely known and respected as Paris in the 1920s. Ninety years from now will people wish they had been part of the Portlandia vanguard in the 2010s?
Posted by Je4son at 10:09 AM