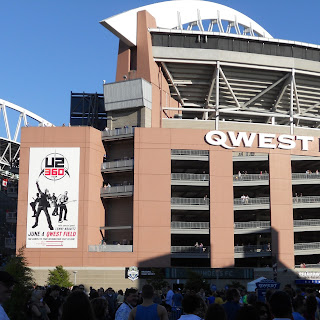 Performer:  U2
Genre: Rock
Date: June 4, 2011
Venue: Qwest Field, Seattle
In 6 words or fewer: Stadium acoustics mar great production.
Video link: U2 Live Pride (In the Name of Love)
Performance Review:  Bono & The Edge & 493 other tour employees produce a powerful rock extravaganza on the "360 degree" stage plus a  live video on a remarkable, changeable jumbotron hung under the "quadropuss."  That's what their rock revival tent looks like: an octopuss with four legs and a spire.  Under it is their oval stage with rotating bridges to the platform that circles the stage, from which the tour derives its name.  Within the circle is the "red zone," the high-rent area where people stand up-close and personal. 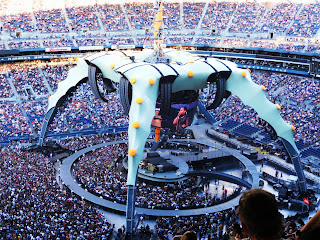 Any stadium show requires video for the distant fans in the stands.  U2 brings everything they need with them in what looked like about 30 trucks.  The jumbotron is amazing.  It is not static; at times, it stretched down to the stage floor.  After 93 shows, everyone knows what they are doing: the videographers, Bono, the video mixers, the lighting crew.  Pros.

Some of the video was preproduced.  The best introduced "Beautiful Day."  Bono spoke of Gabby Giffords and how she took a bullet for her public service.  The video showed the view of Earth from space. Then came Giffords' husband, Mark Kelly, on video from space, speaking to us and holding up words in zero-gravity.  Among the words was "It's a Beautiful Day."
Venue Review: Qwest Field was built with acoustics in mind, but not for music.  One purpose for the roofs is to bounce sound down to the NFL football field and give the Seahawks a home field advantage.  Loud fans can cause chaos to opposing teams. Unfortuntaely, the roofs also cause chaos for music.  Initially, our seats were near the ceiling.  Literally, we could not make out the words of Lenny Kravitz, the warm-up act, or Bono.  It was just one loud, bassy, mush.  After a few songs, we gave up.  It was painful to listen, so wen went outside.


Fortunately, we returned to find other seats that were not under the roof, and the acoustics improved.  However, literally, the band sounded better one block from the stadium after we left for good.  Others agreed: the sound that escaped the stadium was significantly superior to what paying customers heard.

Officially, Qwest Field did NOT allow camcorders for the concert, but nobody frisked your cargo pants pockets.  These days, iphones can do video, which is what I used for the video linked above.