Family, Chumps or Both 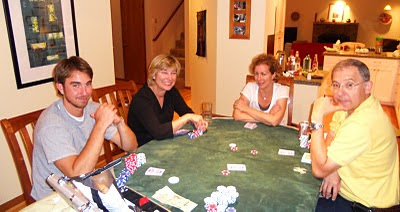 While Kent was in town, Uncle Ken did his best to share his knowledge of winning poker strategies to young Kent. Uncle Ken has devoted countless hours and who knows how many dollars to learning the art of Texas Hold ‘em. Among the lessons taught was to look around the room and try to determine who you can beat and who will take your money. Play with the chumps or be the chump.

Uncle Ken took Kent to a tournament, and Kent got a couple hours of entertainment among the strangers in the stark confines of the place in a sketchy part of town. When Kent was offered another opportunity to practice his skills and earn money from strangers, he declined, noting that he’d rather spend the time with family.

One could argue that such a decision demonstrates that Kent has absorbed the sound values of love of family. However, when looking at the stack of chips, above, it might also indicate that he knew where to find the chumps.
Posted by Je4son at 3:10 PM