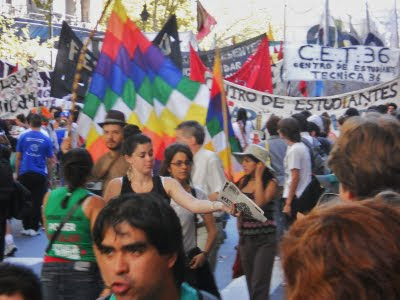 Buenos Aires – March 24, 2011. Hundreds of thousands of Argentineans clogged the streets of central Buenos Aires to mark the day, 35 years ago, when they lost their freedom to a military junta. Mothers of some of the 30,000 disappeared hoisted signs. Some of the young, too young to appreciate the seriousness of eight-year reign of terror, danced in colorful costumes. Older men and women chanted with an earnestness of patriots who felt duty-bound to teach those young people with their testimony, both orally and on their placards.

Many, many, many groups approached the Plaza Mayo from several directions. At first, we were somewhat disconcerted. In one place, young men and women, with faces covered by scarves and sticks like billy clubs, blocked some streets. Behind them, black smoke arose from a tire fire. A quarter mile up the boulevard, a group carrying dozens of powder blue national flags approached. As we crossed in between, we wondered if we were about to be swept up into a violent clash, so we moved on as we noticed the flag bearers turn in a different direction.

At the largest staging area, near their congressional capital building, movement began. An endless and growing flood of people. With banners reaching up to 15 feet tall, the feel was like being in those tsunami videos. Although police deployed away from the scene to keep motor vehicles out, we saw no uniformed police near the masses. Perhaps that's why we heard the shake of spray-paint cans in the hands of a few people. We saw their speech on sidewalks, walls, and over the political posters of candidates seeking election in the first week of April. 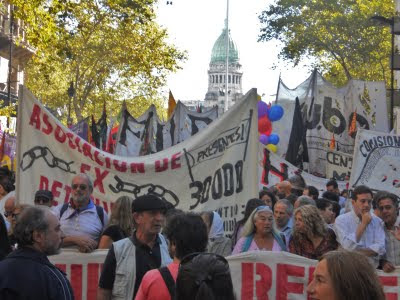 A miniscule bit of chaos among the otherwise peaceful, yet extremely passionate, demonstrators. It's a tiny price of freedom that the people of this country welcome gladly. They have seen the opposite. Total control. Any hint of opposition meant death. Often, I wonder if we in the United States understand and cherish what we have, how we got it, and how we can lose it if we remain too distracted.
Posted by Je4son at 4:59 AM