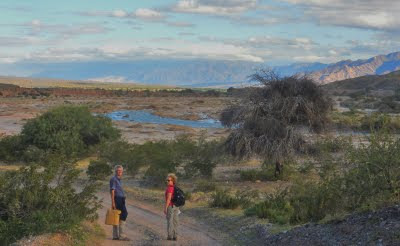 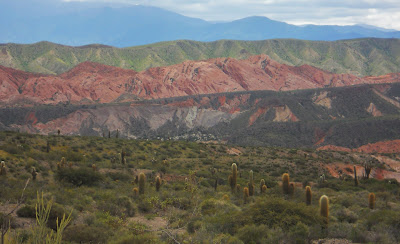 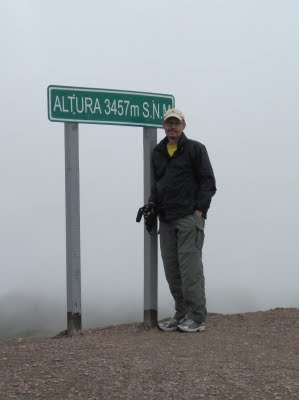 We took the long way from Salta to Cafayate. Day one of the journey took us from Salta to Seclantás on some lonely roads where we were seemed to be the only people in the world witnessing grand displays of nature. Nick Evans (ponchotours.com) served as our guide / driver.

The flat tobacco region lies between Salta and the Cuesta del Obispo. Once into the river valley, the hillsides are covered in thick trees with an almost tropical feel. Rain the previous week meant we had to ford many creeks flowing over the road down into the wide river basin. We climbed up and up, through twisty roads that eventually lost the trees and looked more like the misty green British Isles until we reached the clouds at 3457 meters above sea level. But not for long.

After the summit, things dried out rapidly. Before we knew it, we were on a narrow gravel road winding through a desert with cactus, dry creeks, and forever views of different colored hills leading to snow-capped mountains. But why use words? Here are some photos of the drive.

At Seclantás, we dropped off car and bags and took off on our feet for a long walk. Toward the end was a ruined adobe mansion from the Spanish days of hundreds of years ago. The story goes that the King kicked out the original homesteader, giving the land to the Torino family (see my note on El Esteco / Michel Torino winery). From the ruin forward was a view worthy of World Heritage Designation: Open for hundreds of kilometers; river meandering where it wants, carving banks 10 feet tall; mountains of ever varying hues and no people. On the bank, we sat with our food and water, drinking in the feeling that we could be pioneers discovering this land for the first time.